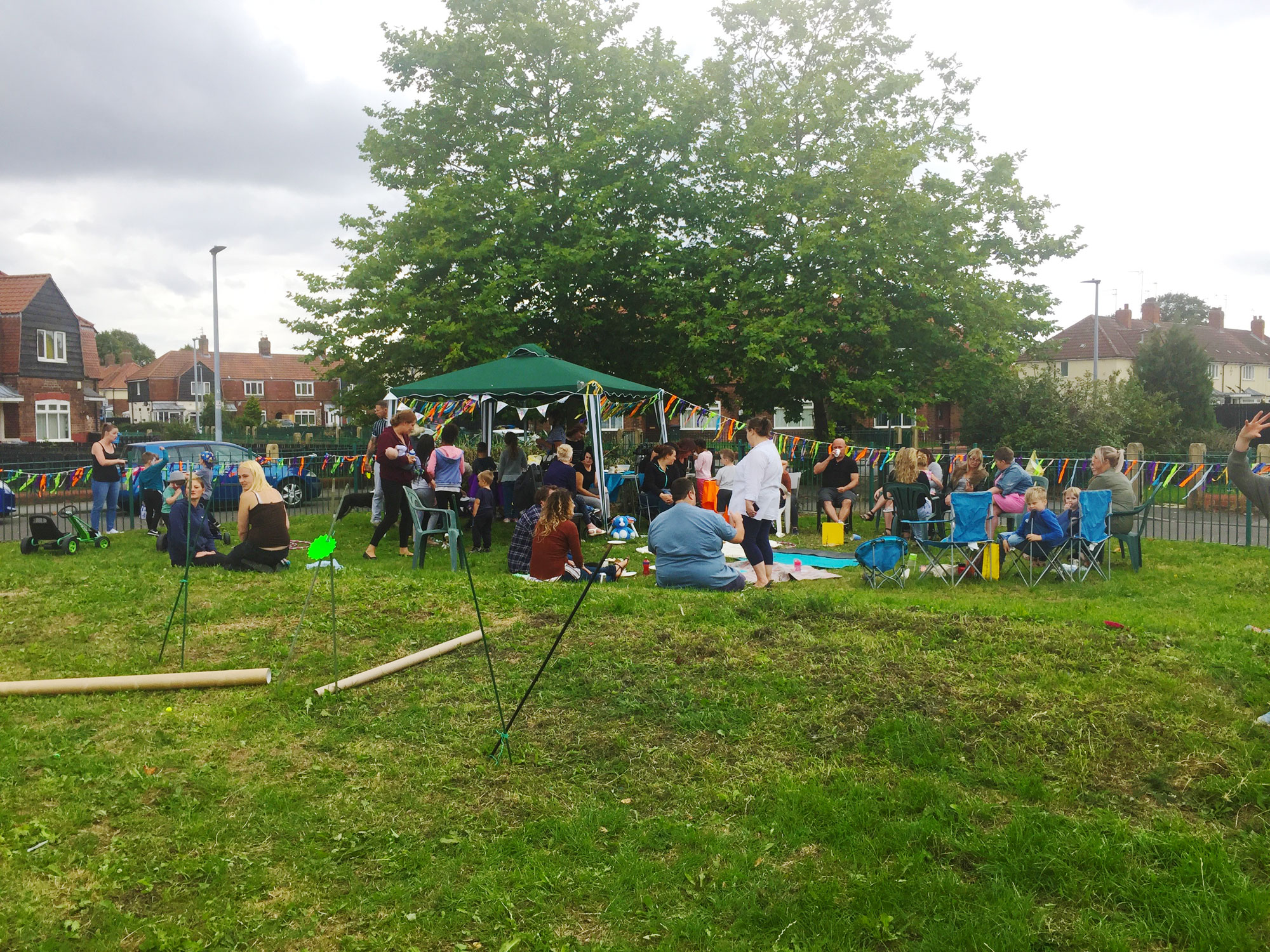 From Recluse to Community Restorer

There is nothing that thrills a church planters heart more than seeing the people who agreed to come with you on this crazy adventure, thriving on mission.

A few weeks ago our friend Kathy came to us and asked if she could borrow the church flasks we used to make hot drinks as she was planning a community picnic on the green in front of her home. We jumped at the chance to resource her in every way we could think of and a few of us, that were free on the day, popped the date in our diaries so we could go and support her.

When I turned up with my children and our picnic I felt rather emotional. 50-60 people from the local area came together, a number of whom remarked they had lived in the area for years but felt too intimidated to speak to anyone. The estate in question is filled with ex-council, post-war housing that has been bought up slowly over time. Behind closed doors people lead tough lives; unemployment is high; incomes low. The same corner that now housed a cheery bunting-clad gazebo had, a few weeks ago, been a common hot-spot for drug dealers. Kathy ‘had a word’ with the aforementioned one day as they would deal right outside her front garden. She asked them, in no uncertain terms, to move on as Kathy and her friends were taking back the community and didn’t need that sort of thing going on. Undeterred by the resulting verbal abuse Kathy and her neighbours, either side and from across the street, continued to gather to natter and drink tea in her front garden, as they had now formed the regular habit of doing over many months. Instead of the exchange of drugs in the street; the exchange of banter, garden plants and household items were now passed between the garden fences. I am told the sound of laughter can be regularly heard now on Kathy’s corner until the small hours of the morning. 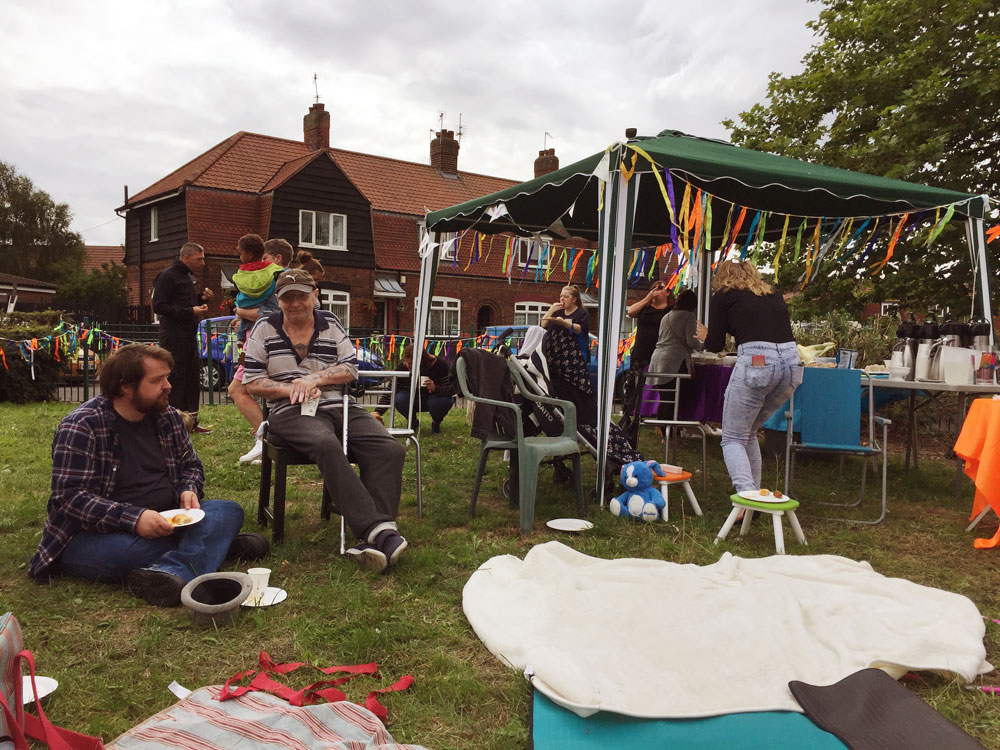 As I sat and observed the mums painting kids faces with our church face paints and the home-made cakes being devoured, I silently thanked God for his faithfulness over the years. When I think about Kathy’s life story over the last decade I marvel at all Jesus has done in her and is now doing through her.

“The same corner that now housed a cheery bunting-clad gazebo had, a few weeks ago, been a common hot-spot for drug dealers.”

When we met Kathy a number of years ago in our sending church, before we planted River City, Kathy was in real danger of becoming reclusive. Recovering from the after-effects of an abusive marriage relationship, the single mother found herself suffering chronic bouts of depression, as well as on-going health issues that had left her unable to work. As a result Kathy found it hard to stay on top of her home and became trapped in cycles of feeling too ashamed to ask for help or even let anyone through her front door.

Over time, in the safety of a healthy and loving church, I observed Kathy begin to make friends and start a long journey of receiving God’s love through people she could trust, good pastoral care and discipleship. Kathy began to volunteer for the church and open up more in her mid-week group. Admitting her shame over the living conditions both her and her son found themselves in was a significant step for her. Instead of being rejected as she feared; her friends responded with compassion and practical help. Not long later a particularly faithful and determined friend, Ann, began a committed clean up operation – restoring not only Kathy’s home and garden but also some much needed confidence and self-esteem. She now had a home she enjoyed, a space she could relax in and rest for the first time in a long time.

Whilst the clean up effort was on-going, her neighbours on either side were party to a front-row seat to God’s love in action; through the church. Many conversations and cups of tea were shared with her neighbours and their families. Eventually Kathy’s new garden became the place to spend time, gates were placed in the joint fences between the homes and dogs, children and adults alike began to free flow between the houses.

It was during one of their regular late-night chats that Kathy and her neighbours wondered aloud what they could do to bring their newly discovered love of community to others on their street and around the local green over the road. 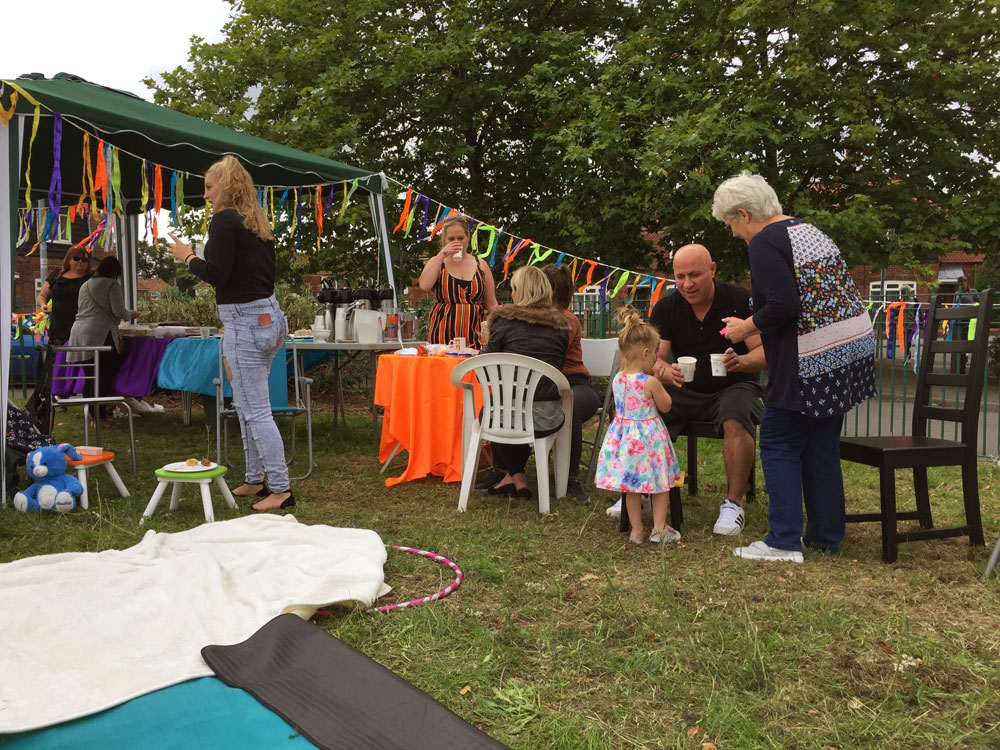 Looking around on the day of the picnic itself; my heart was full. God spoke to my husband and I about planting a church that brought ‘streams of living water’ to peoples lives and to their communities. The picture comes from a number of places in the bible where God’s presence flows like a river and brings transforming life to the different places it encounters. We really didn’t know what we were doing when we started a church – we just said ‘yes’ to Jesus when He asked. We simply wanted to communicate that God is the answer to our deepest needs and give people a chance to access Him and understand him. It was our hope that from there, once people had begun a relationship with Jesus that by ‘drinking’ from Him as their source it would transform them. They, in turn, would then have enough to give away to others around them; that streams of living water would flow out from them, as Jesus says in John 7:37-38.

“Instead of the exchange of drugs in the street; the exchange of banter, garden plants and household items were now passed between the garden fences. I am told the sound of laughter can be regularly heard now on Kathy’s corner until the small hours of the morning.”

There are times as church planters when you really can’t see whether God is at work or whether your people are ‘getting it’. But as I looked on during the picnic at the children playing and neighbours who haven’t talked to each other before I see the flowing current of God’s presence. It has been slowing building up in Kathy as she worked with Him to courageously unblock the things that had prevented the stream of living water flowing in her life.

This term Kathy and Ann are running Alpha in Kathy’s front room with her neighbours on either side as well as a few other guests. This is the same front room that used to house Kathy on the sofa when her depression was so bad she had to force herself to choose between speaking or breathing. This term we are praying the same front room that was once a source of shame and embarrassment will become a place of new hope and new life as she steps out to run Alpha.

The River Will Burst its Banks 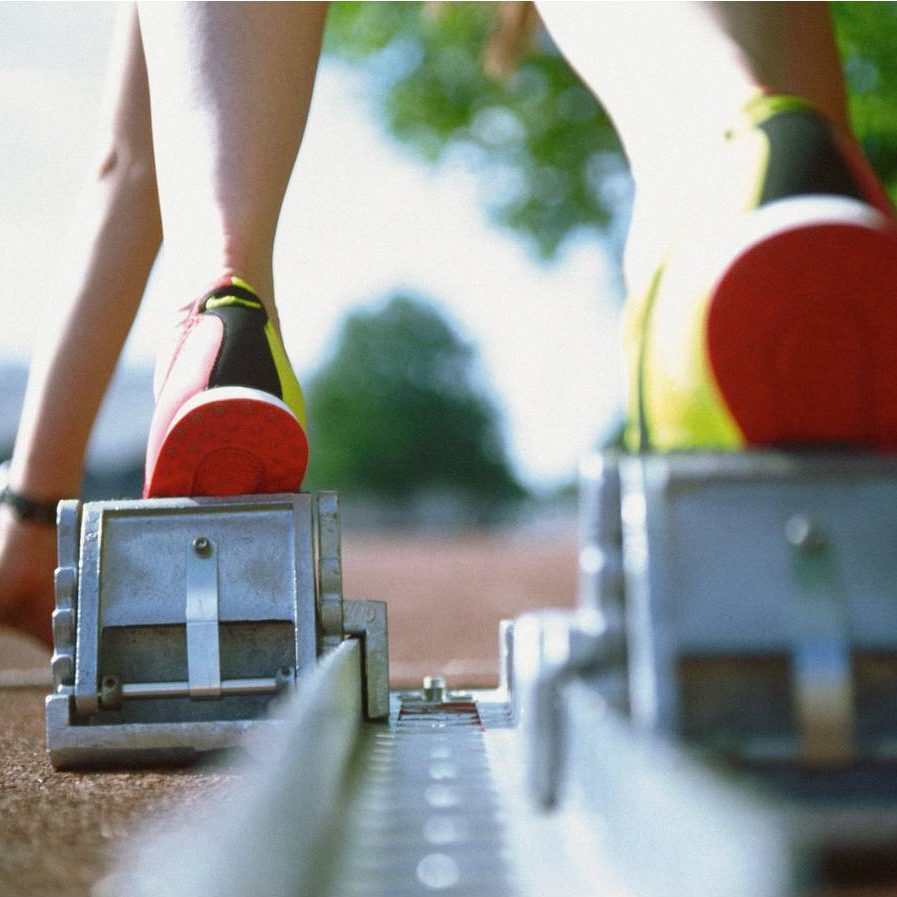 Hidden in the shadow of His Hand 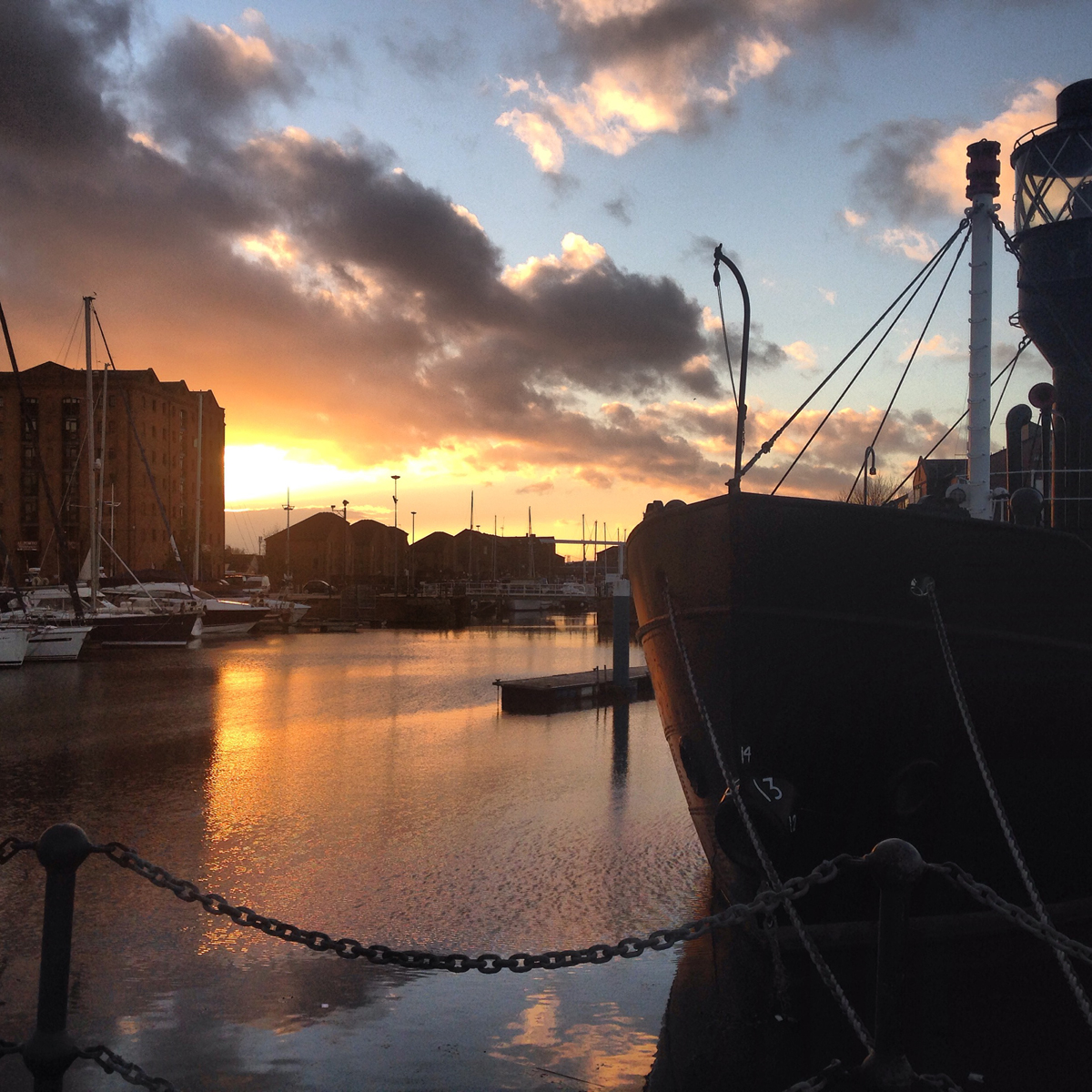 A letter to my church: 10 years of thank yous 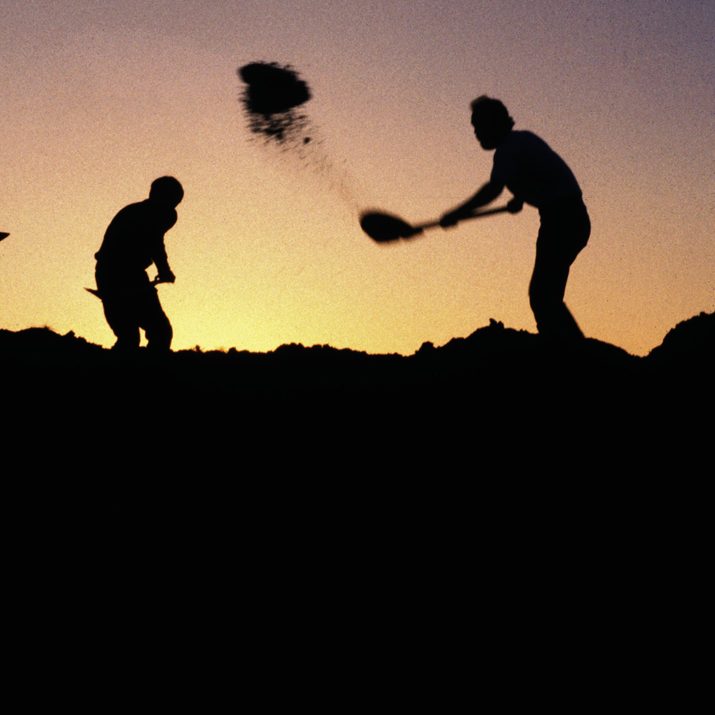